The Strasbourg based European Court of Human Rights has a long record of cases dealing with surveillance, starting with Klass v. Germany (1978).  In Klass the Court explicitly accepted the necessity for secret surveillance performed by public authorities in European post-World War II democracies, provided respect of certain victim and legality requirements deduced from Article 8 and 13 of the 1950 European Convention on Human Rights (ECHR). After the introduction of this premise, the Court proposes several important guidelines for lawful and human rights compatible surveillance that taken together built up to a comprehensive framework answering equally to questions about power divisions and checks on potential power abuse.  Today there is a vast body of case law developed by the ECtHR and the European Union Court of Justice (hereafter: CJEU) that confirms and adapts these guidelines, often in view of addressing recent technology (e.g. GPS surveillance) or institutional developments (e.g. overlap between police and secrete services).  In this article we will focus on developments with regard to the legality principle in the context of surveillance in the realm of criminal law and intelligence work by secret services. A more rigorous interpretation of legality principle in post Klass surveillance case law certainly qualifies as one of the most remarkable developments in the European Courts case law on surveillance. In particular, we will show that the strict approach towards the legality requirement enshrined in Article 8 ECHR adopted by the ECtHR in Huvig (1990) in the context of telephone surveillance will be then re-applied in all the following judgments of the Strasbourg Court and even adopted by the CJEU (from Digital Rights Ireland on) in the context of other surveillance practices. 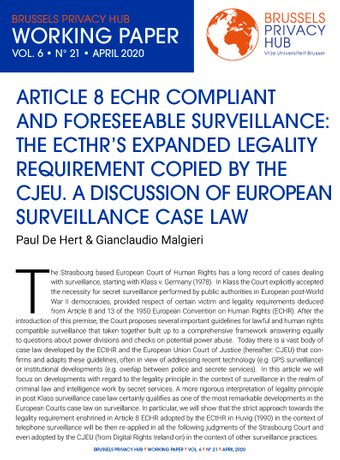