The Proposed ePrivacy Regulation: The Commission's and the Parliament's Drafts at a Crossroads?

The EU’s Digital Single Market Strategy aims to increase trust and security in digital services. A reform of the EU personal data protection regulatory framework through the introduction of the General Data Protection Regulation (GDPR) was a key step to increasing trust in the security of digital services. Following the reform of the GDPR, the strategy also includes the review of the ePrivacy Directive (Directive 2002/58/EC). Indeed, on 10 January 2017, the European Commission presented a proposal for an ePrivacy Regulation to be in force on 25 May 2018, simultaneously with the GDPR. However, this ambitious timeline has suffered delays and the proposal is currently going through the European Union legislative process. On 26 October 2017, the European Parliament voted in favour of the amendments proposed by the Committee on Civil Liberties, Justice and Home Affairs (LIBE) in plenary session. This chapter aims to highlight specific aspects of the ePrivacy Regulation draft, in its Summer 2019 state, to shed light upon certain of its most important elements. While the new Commission after the elections of June 2019 awaits appointment, we consider it important, during this stage of the law-making process, to take a photograph of developments so far, which include the Commission’s original draft and the Parliament’s response (the Council is yet to provide its final position). In this way, future comparisons with the final wording and the reasoning behind them, will be facilitated. 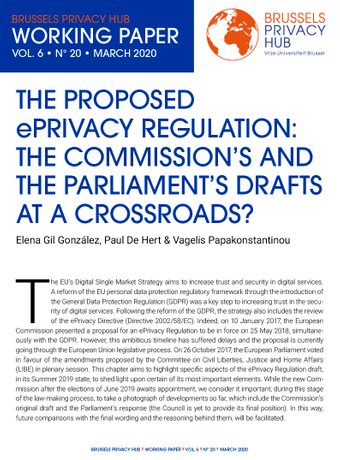