The two European Courts (the European Court of Human Rights, ECtHR and, to a lesser degree, the European Union Court of Justice, EUCJ) have contributed greatly to the development of a legal framework for surveillance by either law enforcement agencies in the criminal law area or by secret services. Both courts put great emphasis on a system of control ex ante and post hoc by independent supervisory authorities. A complex and controversial issue remains whether the human rights to privacy, respect of communications, and to an effective remedy (enshrined in Article 8 and 13 of European Convention on Human Rights (ECHR)), requires judicial review as a necessary safeguard for secret surveillance or alternatively, at which conditions, parallel systems of non-judicial review can be accepted as adequate safeguards against illegitimate interference in citizens’ private life.

The European Courts have not yet established a clear doctrine in determining suitable thresholds and parameters. In particular, the ECtHR has a flexible approach in interpreting article 8 and 13 ECHR, depending on several factors (“vital” interests at stake, political considerations, etc.). In general terms, the Court has shown a preference towards judiciary oversight, but in the European legal order there are several examples of alternative oversight systems assessed positively by the Court, such as the quasi-judiciary systems (where the independency of the supervisory body, its wide jurisdiction, its power to data access and its power to effective reactions are proved) or the system of oversight set by Data Protection Authorities in the EU member states. However, in recent judgements of the ECtHR and the EUCJ we see an increasing emphasis on declaring the necessity of a “good enough” judicial (ex ante or post hoc) control over surveillance, meaning not simply a judicial control, but a system of oversight (judicial, quasi-judicial, hybrid) which can provide an effective control over surveillance, supported by empirical checks in the national legal system at issue. 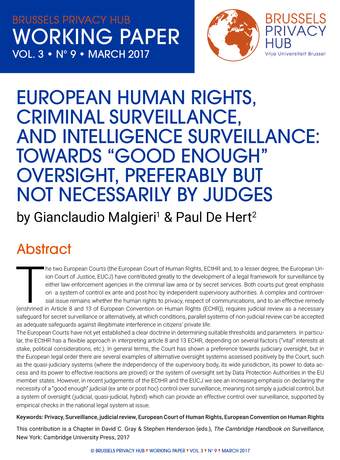